Young adults are hooked on to stories written by the west. There is absolutely nothing wrong with them, and many of them are written eloquently or have plots that appeal to the youth. Sometimes, these books are made into movies adding richness to their conversations. Let’s seize this opportunity to talk to young students about Indian fiction. Tap into their curiosity by showing them trailers about the Indian books or connecting Indian fiction to their lives. Indian stories have plots that Indian children can relate to. Many genres available describe teenage life, or politics or wildlife. Here are a few you can use to tap into their interests.

Talking of Muskaan by Himanjali Sankar. Muskaan is in hospital, fighting for her life. Three classmates “her former best friend Aaliya, the hottie Prateek, and the class topper Subhojoy” talk about Muskaan, and themselves. About school, home and the larger world, the school bus and the basketball court; about secrets that become burdens. And through their stories, twists and turns are revealed that drove Muskaan to try to kill herself. Funny and tragic by turns, Talking of Muskaan is a warm, moving novel about life and death and the young people caught in between. Click here to take a peek at this book.

Jobless Clueless Reckless by Revathi Suresh. A coming of age story about a young girl coping with a mother who has cut herself off from society, a father who has no time with a family and that leaves Kavya with her brother. How will she cope with board exams looming close? A short trailer to nudge your students into trying out this book of hope, and life from a different lens.
Zombiestanby Mainak Dhar Cover illustration by Kunal Kundu. Watch the Trailer.  It began with

undead Taliban in Afghan villages”. In a world laid waste by this new terror, five unlikely companions come together in a devastated New Delhi” a seventeen-year-old boy dealing with the loss of his family, a US Navy SEAL trying to get back home, a middle-aged history professor, a young girl and her three-year-old brother. When they discover that the child may hold the key to ending the pestilence that threatens to destroy their world. An epic journey against terrible adversaries, both human and undead. Will they survive? Or will they too, like many before them, become undead citizens of Zombiestan?
Through the Killing Glass by Mainak Dhar and Cover illustration by Kunal Kundu 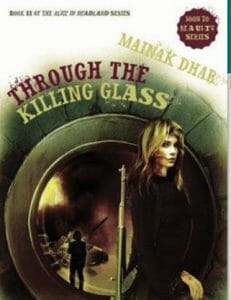 Sequel to Alice in Deadland.  Trailer of Alice in Deadland. After defeating the Red Guards and brokering peace with the colony of Biters, Alice believes that finally there will be peace in Wonderland, the human colony she has carved out of the Deadland.
But soon Alice and her band of soldiers find themselves at odds with the people of Wonderland. There are signs that the Central Committee in China are developing a weapon, more terrible and fearful than anything Alice has ever encountered before. Can Alice unite the people of Wonderland?
Praise for Alice in Deadland: ‘Dhar manages to pack in a lot of action on every page, so you don’t breathe easy.’ – Mint; ‘A must-read for those who love to read fast-paced novels with powerful characters.’
— www.bookgeeks.in
(Courtesy – Duck Bill Publication)